EARLY IN 1962, a killer disease was on the loose in Wales. People were gripped by fear and hundreds of thousands demanded vaccination. Week by week, as the disease spread, the death toll mounted.

Mystery still surrounds many aspects of the story – especially how it was spread. One doctor played a vital – and secret – role. Buried in official files is evidence that elderly mental patients were treated with an experimental drug, tested only on mice.

On 13 January 1962 a man called Shuka Mia arrived in Cardiff on a train from Birmingham. He’d flown into Britain the day before on a plane from Pakistan, where a smallpox epidemic claimed hundreds of lives that winter. Though he carried a vaccination certificate, he brought the deadly virus to Wales.

There were very few people in Wales who knew how to combat smallpox. One of them was Prof. John Pathy, whose key role in the smallpox outbreak was never revealed at the time.

On that day in 1962, the traveller – and the virus – made their way through the centre of Cardiff to the place where he’d arranged to stay. The disease he was carrying was one of the most horrific known to man. Although it has now been eradicated, in 1962 it was still rife in many parts of the world.

A day after he arrived at the Calcutta Restaurant in Bridge Street, a GP (Dr White) was called to see Shuka Mia who was in bed upstairs. He suspected smallpox. The patient was taken to the Lansdowne isolation hospital, where John Pathy saw him the next morning and confirmed the diagnosis.

As the news broke that smallpox was in the city, a desperate search began for anyone who may have been in contact with the carrier. The patient was sent to the top of a mountain above the Rhondda where he was shut away from the outside world. All that remains of the Penrhys smallpox hospital on its windswept hilltop are the high walls which surrounded it. But during the crisis of 1962, 12 patients were isolated there as doctors fought to control the outbreak.

In Cardiff it was decided to vaccinate anyone who might have been in contact with Shuka Mia – either in the city or on the train that brought him to Wales. But thousands of people demanded vaccination and sometimes tempers flared. Over the next few weeks, 900,000 people in Wales were vaccinated against smallpox. Extra supplies of vaccine were brought in from as far away as Argentina.

Whether through luck or planning, Cardiff escaped the threat of smallpox. There were no new cases – and the authorities were confident they had traced all Shuka Mia’s contacts.

START OF THE REAL CRISIS

For more than a month it seemed the smallpox scare was over. Then, out of the blue, a consultant at East Glamorgan Hospital became seriously ill (25 February). The mysterious case of Dr Robert Hodkinson marked the real beginning of the 1962 crisis. Bob Hodkinson knew that, somehow, he had contracted smallpox. Alone among the medical staff at East Glamorgan, Bob Hodkinson had not been revaccinated after the Cardiff scare. Next day, the diagnosis was confirmed.

Staff at the the isolation hospital on Penrhys mountain were told to expect the transfer of a patient from East Glamorgan. But they mystery was: how had the consultant caught the disease? The trail led to the operating theatre and a patient who had died of a mysterious illness two weeks earlier – before she could be operated on. Dr Hodkinson had attended the post mortem examination.

The young woman had gone to her mother’s home in Maerdy at the top of the Rhondda Fach to have her second baby – but became seriously ill after miscarrying on February 8. Only when Dr Hodkinson was diagnosed with smallpox was it suspected that she may have died of the virus.

After she died, the woman’s body was taken to her sister’s house in Ferndale, where it lay in an open coffin for six days while relatives and friends paid their respects. She was buried in the nearby cemetery a week before Dr Hodkinson became ill. Several of her relatives and neighbours caught the disease – and her sister died.

Now it was the Rhondda’s turn to panic. Five cases were identified and a massive hunt for contacts began. Health Inspectors worked day and night to hunt down smallpox contacts. As doctors struggled to vaccinate the entire population of the two valleys, there were even calls from outside for the Rhondda Valleys to be isolated.

But how had the virus got into the Rhondda? At the time the first victim must have been infected, the only known smallpox case was in hospital on top of the hill above her home – but there was no evidence that she’d ever had any contact with him. The official report suggests the virus may have been carried to her home on the air. But was there a missing connection between the Rhondda and Shuka Mia when he was in Cardiff? Prof John Pathy believed there was – a visitor to Shuka Mia when he was ill in a room above the Calcutta Restaurant.

On March 6, Dr Robert Hodkinson died. His body was taken, under police escort – to Glyntaff crematorium in Pontypridd. The brief service was conducted in the open air because of the fear of infection. That day, it was reported that Shuka Mia had been discharged – cured of the disease which he had brought to Wales.

The outbreak in the Rhondda area continued until 13 March – and eventually claimed six lives. But by the end of the month, the epidemic seemed under control. The newspaper reported that no more cases were expected and the all clear was near. 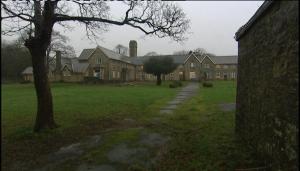 However, the worst was yet to come. On 6 April, eight patients at Glanrhyd Mental Hospital near Bridgend were diagnosed with Smallpox. One died that night. Many of its patients came from the Rhondda area and in March 1962 the authorities began a programme of vaccination within the hospital.

As preparations were made to transfer the infected patients to an isolation hospital, emergency measures were taken at Glanrhyd. The infected ward was sealed off and the staff were re-vaccinated . The hospital records show that only eight of the 45 elderly women on the ward had been vaccinated.

At Blackmill isolation hospital, four miles away, nursing staff who’d just been released after monitoring contacts from the Rhondda volunteered to go back in and nurse the patients from Glanrhyd.

In the first week, 12 patients from Glanrhyd died. For the nursing staff, it became a race against time – they had to go fifteen clear days to be sure no other patient had fallen victim to the virus. In his secret role as smallpox consultant, John Pathy drove almost daily to visit the patients and staff confined in Blackmill hospital.

But how had the virus got into Glanrhyd? The search for a carrier drew a blank. The official report suggests it may have been carried on the air from Heddfan hospital, three quarters of a mile away, where some of the Rhondda cases had been isolated.

No effective treatment for smallpox has ever been developed, but the hospital files revealed another remarkable fact. Supplies of an experimental drug were sent to Wales by the Wellcome Foundation and used on the patients from Glanrhyd. It had only been tested on mice, but the manufacturers said it was worth trying if patients seemed almost certain to die.

The hospital at Penrhys – where Shuka Mia had been isolated and Dr Hodkinson had died – was destroyed when the outbreak was a thing of the past. Fire consumed any remaining traces of the virus which had plagued Wales in the spring of 1962. All that now remains are the walls around the site.

NOW READ THE FULL DETAILS BY CLICKING ON THE MENU TABS

33 thoughts on “Storyline – outbreak in Wales”